Cheap, tough and green: why aren’t more buildings made of rammed earth?

This is a repost of an article published by theconversation.

It’s fair to say that rammed earth, as a construction technique, has stood the test of time. It has been used to create buildings around the world whose beauty and robustness are still visible today, like the Alhambra in Spain and the Great Wall of China, both built more than 1,000 years ago.

Traditional rammed earth is made of a mix of clay-rich soil, water and a natural stabiliser such as animal urine, animal blood, plant fibres or bitumen. It is then compacted inside temporary formworks that are removed after the mix has dried and hardened. The resulting structure can withstand compressive forces of up to 2.5 megapascals (around 10% of the average compressive strength of modern bricks).

The walls can be reinforced using embedded timber beams or bamboo grids, and of course they need some architectural features to protect them from the rain and wind. Historical examples of buildings made of traditional rammed earth can be found in South America, China, India, the Middle East and North Africa.

In Europe, especially in France, Britain and Germany, traditional rammed earth is enjoying a resurgence, and several modern buildings have been constructed using the technique, such as the three-storey rammed earth home shown below, built in 2008 in Austria.

In the past 30 years a new version of rammed earth has appeared and gained popularity in certain parts of the world, such as Australia, California and Canada. Called cement-stabilised rammed earth (CSRE), it consists of a mix of low-clay soil, water and cement. Like traditional rammed earth, this mixture is compacted inside temporary formworks and left to dry.

But it is an order of magnitude stronger, withstanding compression forces up to 40 megapascals, giving it similar strength and durability to concrete. This means that walls do not need special protection from rain and wind because they are strong and durable, especially if reinforced with steel.

Both traditional rammed earth and CSRE have several characteristics that make them an attractive choice of building material. The main ingredient is soil, which is cheap (if not free). In remote areas, building with local soil means significantly reducing the costs of transporting construction materials to the site.

The building technique is very straightforward. In general, only one experienced builder is required on site to instruct labour force about how to construct the formwork and mix the materials. The rest of the work can be done by untrained or unskilled people from the local community, creating jobs and reducing the costs of transporting and accommodating workers from elsewhere.

It has to be strong to hold up all those tourists.
Airunp/Wikimedia Commons

Although rammed earth does not have very good insulating properties, the walls are very thick (typically 250-800 mm), meaning that rammed earth buildings can easily produce comfortable indoor conditions in hot and arid places. Rammed earth walls breathe, hence they can regulate the indoor relative humidity, making it suitable for people with respiratory problems.

And finally, the final texture of rammed earth walls is unique and beautiful, so they typically do not need any plaster or render.

There are currently several projects around the world that aim to promote rammed earth as a sustainable and cost-effective construction technique.

My colleagues and I are working with the WA Department of Housing to investigate the use of CSRE in remote Indigenous communities. Gaining the trust of the Indigenous population has been so far the most difficult aspect of the project.

Meanwhile, in the United States, Colorado University is starting a similar project to look at the possibility of building rammed earth homes on Native American reserves.

A closer look at the technique.
Rongrong Hu, Xi’an University

Most impressively of all, China’s Xi’an University of Architecture and Technology has developed a project to help rural communities build new houses using both traditional and modern rammed earth. The scheme has successfully helped the local population to create entire new villages built with rammed earth.

But rammed earth is not only applied in affordable housing projects. Strangely enough, the other most common application is in expensive residential buildings designed by eccentric architects for wealthy and environmentally concerned clients. These houses usually end up in and and design magazines and are considered real pieces of art.

With a room this nice, who needs curtains?
Stephen Dobson, Ramtec

So, why isn’t everyone using it?

Rammed earth has been used for centuries, but today its use is limited to specialised projects like the ones described above. Why is it not extensively used around the world, for ordinary buildings like offices and houses?

One of the major reasons is likely to be a lack of knowledge. Although rammed earth itself is old, our research is quite a new field compared with other more traditional construction materials like concrete, steel, masonry and timber. Unfortunately, a lack of research means a lack of understanding of the material and its structural properties.

Another obstacle is regulation, or a lack of it. In Australia, as in most countries, there is no building code for rammed earth buildings. The prospect of working with an unregulated construction technique would discourage many engineers and architects.

The good news is that the interest in environmentally friendly and affordable houses has never been bigger. Researchers from different backgrounds (engineering, materials science, architecture, chemistry, and more) are beginning to investigate the different properties of rammed earth with the aim of promoting this construction technique.

While it might not be as grand as the Alhambra, the chances of finding yourself inside a rammed earth building in the years to come are growing.

This article was originally published on The Conversation.
Read the original article.

We are partnering with the University of Western Australia and the WA department of housing using a Research Council of Australia grant to investigate the appropriateness of rammed earth for indigenous housing. There are two complete houses that will be monitored for two years with sensors in each room and several walls. It was great to visit the site and see that houses being lived in and appreciated.

These thermal mass walls are already working well in the Kalgoorlie climate with occupants expressing the excellent comfort levels. Nearly all houses in the area have evaporatuve air conditioning that uses huge amounts of energy and water. The occupants expressed their joy of being comfortable in a naturally conditioned house on a hot day.

It seems logical that these people who are ‘of the earth’ would be suited to well designed earth houses.

Architizer is the largest platform for architecture and design online. They recently celebrated earth day with some great examples of an eco friendly construction method, rammed earth.

“As an eco-friendly alternative to concrete, rammed earth has been trending for a minute; suffice it to say that the sustainable and cost-effective building solution has come a long way from ancient times. By using natural and usually local materials like sand, soil, clay, chalk, lime, or gravel, compressed into blocks, rammed earth buildings have low embodied energy and produce little waste. Moreover, the composite material is attractive as a means of passive climate control — and, if these projects are any indication, aesthetically, as well.” 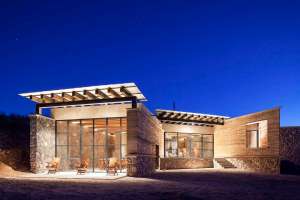 More info at Get Down to Earth: 6 Examples of an Eco-Friendly Construction Method. Whilst there you can find more information and great images on rammed earth  at this link –  Rammed Earth: Sustainable Design’s Eco-Chic Flower Child.