3D Printed earth buildings are not new, but when Ronald Rael of eartharchitecture and professor of architecture at the Uni of California in Berkley starts pressing “print” on his computer, things get interesting. He is using clay, sand and salt among other materials to print out panels and blocks of earth. It looks very sci fi and artistic yet at the same time has links to African Mosques and middle eastern architecture.

n this printed house sand is used for the modular bricks and 3D salt is used for the glass. Quite an interesting concept especially with the green walls. There are more images at emerging objects.

As discussed recently in New Scientist, “for Rael, building with earth has simply been updated. On his Instagram feed, he uses the hashtag #dataclay to describe this mesmerising confluence of computer-based fabrication and good old, fingernail-crusting clay.”

“Clay and salt – as well as resin, nylon and sand – can now be squeezed out precisely in layers to form complex, interlocking geometric shapes. Whether you call them bricks, modules or components, it is earth architecture reborn, filtered through algorithms and high-tech machines.” 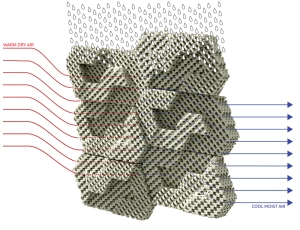 One of emerging objects ideas is the cool brick that borrows from the ancient technique of the Muscatese Evaporative cooling window. This would be ideal for hot dry climates and would replace reliance on expensive and resource consuming air conditioners. It would also provide a much nicer environment for the occupants.

New Scientist  “Then there’s the Quake Column, an earthquake-resistant structure built from interlocking 3D-printed sand blocks. Inspired by ancient Incan construction, the angular blocks are designed to shift and resettle after a seismic event, unlike the rigid cemented-together rectangular blocks of most modern buildings.”

A major problem with 3D printed dwellings is that might take away local employment. “Indeed, one of Emerging Objects’ fundamental axioms is that the surge of interest in architectural-scale 3D printing has been waylaid by an unnecessary search for ever-larger printers. A building-sized printer might produce a building-sized object, but thinking in terms of individual components, not whole buildings, is the way to go, says Rael. Scale the product, not the printer.”